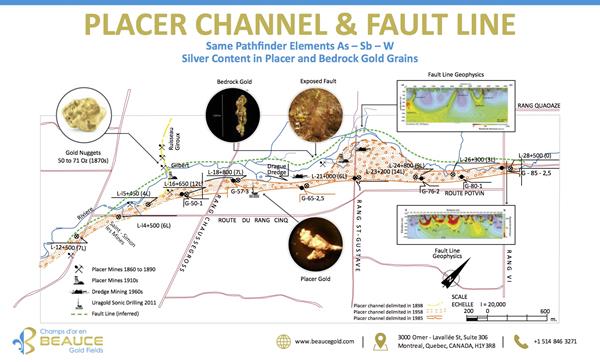 This gives full weight to the theory that the fault zone could be the host of an ancient hydrothermal gold system.

“The match in pathfinders elements, as well as a match in silver to gold content, is the strongest evidence yet associating bedrock gold at the geological fault line to the historical placer channel.” Mr. Levasseur further stated: “This gives full weight to the theory that the fault zone could be the host of an ancient hydrothermal gold system responsible for the concentration of gold in the rock. The presence of this gold system could explain, among other things, the gold placers found in the basal till and the underlying saprolite along the historic Saint-Simon-Les-Mines placer gold channel. We believe that focusing on this system could lead to new gold discoveries”

In Company’s February 3rd 2020 press release, it was reported that samples taken from Poulin trench 10008 contained three visible gold particles totaling 0.55 mg (0.275 g/t). The particles were extracted from volcaniclastic rocks that were heavily injected with rusty quartz veins. The excavation of trench 10008 also exposed the main geological Fault Line that runs along strike the historical placer gold channel on the Company’s St-Simon-Les-Mines property.

Under the supervision of Dr. Marc Richer-LaFlèche, Ph.D. Géo from INRS, the 3 Fault zone Poulin trench 10008 gold particles and the eighteen of the 2011 Sonic Drilled gold grains were sent to INRS and analyzed using a Zeiss EVO® 50 smart SEM (SEM) scanning electron microscope coupled to an Oxford Instruments elementary microanalysis system by X-ray energy dispersion spectrometry (EDS). For the Poulin trench gold particles, 41 of the 62 random sequenced analysis over the scanned particles revealed a silver content that ranged between 2.71% Ag to 8.14% Ag with an average reading of 6.03% Ag.

For comparative analysis, morphology of the auriferous basal till and saprolite gold grains were separated into groups of proximal angular vs distal rounded shapes. It was observed that relatively angular nuggets (example A, B and C) contain an average Au-Ag mixture of 6.80% Ag (Silver) (25 random sequenced analysis ranging 1.26% to 21.30% Ag) which is similar to the gold observe in Trench-10008. Some nuggets have internal cavities filled with iron oxides (goethite-hematite) probably reflecting the saprolitisation (weathering) of bedrock and of little hydraulic transportation. The second population of nuggets (example C, D and E) were rounded by hydraulic transport, and which do not contain silver (only gold). It is likely that these nuggets of almost pure gold were affected by geochemical or biogeochemical process involving preferential leaching of silver. Note that in the St-Simon-les-Mines area, the presence of saprolitized rocks is a local geological characteristic essentially observed in the sector of the Beauce placer near the Gilbert river (including rocks from the 10008 trench and outcrop 8000). Such weathered rocks are not preserved elsewhere in the study area. The presence of gold nuggets showing internal weathering embayments rich in iron oxides is another evidence suggesting a local provenance of gold.

The Company’s July 4th 2018 43-101 Report states that analysis of the silver content and of the gold particle shapes of historical gold nuggets suggest they are detrital in origin and that they have undergone only minor transport. Meaning that the nuggets from the placer channel are derived from pre-existing rock that, through processes of weathering formed the saprolite rock that in turn eroded to form the basal till. The similarities in the silver content of Poulin Trench bedrock gold particles with that of historical placer gold nuggets indicated a shared origin. The Company’s July 4th 2018 43-101 report states that analysis of dense mineral concentrate of basal till and saprolite drilled from the historical placer gold channel revealed pathfinders elements of arsenic, tungsten and antimonyup to 135 ppm As, 580 ppm W and 8 ppm Sb.

In 2019, The Company collected 267 channel samples from rock outcrops and trenches throughout an area of 30 square kilometers centered around the St-Simon-les-Mines historical placer gold district. Out of 267 samples, only sample #8000 and sample TR 10008 contained the full suite of pathfinder elements of arsenic, tungsten and antimony. Sample TR 10008 was taken from Poulin Trench 10008. As noted above, Trench 10008 contained visible gold particles from bedrock and exposed the main geological fault line that runs along the historical placer gold channel. Sample #8000 was from an outcrop to NE to Trench 10008.

Geochemical association of pathfinder elements and silver in gold nuggets is the strongest evidence yet that gives weight to the theory that the fault zone could be the host of an ancient hydrothermal gold system responsible for the concentration of gold in the rock. The presence of this gold system could explain, among other things, the gold placers found in the basal till and the underlying saprolite along the historic Saint-Simon-les-Mines placer gold channel.

The exploration team, under the supervision of Dr. Marc Richer-LaFleche, Ph.D. Géo of INRS, systematically prospected, sampled and mapped the main outcrops, located on both sides of Gilbert River and Giroux Creek, more specifically between Rang St-Charles and Rang VI roads. The geological mapping and structural geology work was aimed at documenting and to gain a better understanding the geochemistry of the area’s sedimentary and volcanic rocks. Special attention was paid to sampling the different generations of quartz veins in the region. 267 channel and bulk samples were collected, prepared and sent to Activation Labs (Ancaster, Ontario) assayed for gold and other trace elements.